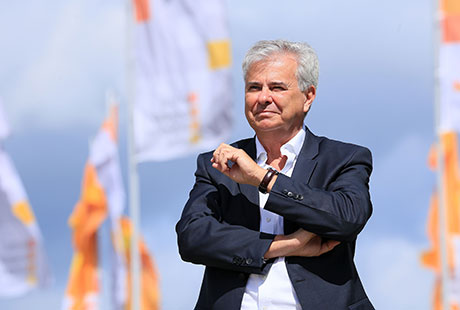 "It was not an easy decision, the most difficult one I had to make. The cancellation of the MSV was a responsible decision towards the exhibitors and all our partners, but at the same time it is a corporate disaster", comments Mr. Jiří Kuliš, CEO of BVV Brno Trade Fairs Co.

You have decided to cancel the largest industrial trade fair in Central Europe. What were the main reasons?

The main reason is the ongoing corona virus crisis. In March, we hoped that everything would end sometime in May and move on. But we hear that the situation may last until the end of the year. MSV is such a large, international and prestigious event that we had to consider all the risks. The conditions for organizing mass events, including trade fairs, are now set in such a way that, according to them, a normal medium-sized trade fair is not feasible. Not to mention a trade fair in the scope of MSV.

Why did you decide now and not wait? After all, there should be another easing of restrictions during the summer.
It was impossible to wait. We decided ten minutes after twelve. We cannot stretch everyone in uncertainty to infinity. Companies and us would risk additional costs in preparation, which could become a wasted investment. Nobody wants that. And the current deterioration of the situation here or there, it proves that the risk and deterioration of the situation may appear.
The Czech Ministry of Health announced that the fairs can hold up to 5,000 people

This was announced, but the conditions are absolutely impossible to comply with. The statement was misleading. Those rules are applicable perhaps for stadiums, the O2 Arena, but not the exhibition centers. Homogeneous event cannot be separated into sub-sectors, where people must not freely move among these sectors.

I do not understand. Can you explain it in more detail?
Neither do we understand this measure. Simply, there can be a maximum of a thousand people in one pavilion, including exhibitors, cleaners and other staff, so there will be fewer visitors than exhibitors. These persons are then not allowed to go to another pavilion. This is not a trade fair!

In response to the cancelation of the MSV, the economy minister Havlíček stated that the government wanted the fair and would set the conditions that would be needed.
I appreciate the efforts of economic ministers and their support, but the Ministry of Health is also part of the government, right? The government had two months to do so. It has never adopted a resolution granting an exemption from emergency measures and authorizing the MSV. Nobody will dare to do that. And neither will we. We are responsible and we understand the epidemiological view that such a large event with such internationality is a certain risk. The risk of worsening of the situation, a ban just before the event, wasting all the investments made into the event, these are all risks that we had to eliminate. Including the reputation risk of the Brno Trade Fairs and the Brno Exhibition Center in the event that the disease actually spreads at the trade fair
How did the exhibitors react to the cancellation of the fair?

Basically positive. Many have asked us to do this, including foreign partners. People are generally scared. The exhibitors were worried of less visitors, non-participation of foreign customers etc.

According to your last survey, what do the exhibitors value at the MSV the most?

Representative presence of the entire industry and leading brands in the market, high internationality, the opportunity to negotiate with domestic and foreign partners face to face, high professional attendance. These attributes would not be met in the ongoing circumstances.

What could this year's MSV look like?
If Covid was not around, the fair could end up with record numbers. With the participation of all leading manufacturers of machine tools and forming machines, plastics, welding technology in the emphasized fields of "Top Technology". With the large participation of the Russian Federation as a partner country, with the first official national participation of Italy, with the first collective participation of Japan, with participation of many Chinese provinces, India and the participation of all traditional exhibitors and brands. We would repeat the Digital Factory show, including 3D printing, extended by the presentation of companies that have been involved in the production of medical devices and protective equipment. That was the vision. The fair would be really good. At least that's how it was conceptually envisioned and that's how it looked still in March. The demand for exhibition space was great.
What did it look like later?

There arrived economic problems of companies, bans on the participation of parent companies. But the fair would still be feasible in terms of participation sometime in mid-May. However, the uncertainty surrounding the fair and the setting of hygienic and safety conditions has been prolonged and, in terms of preparation, it has become unfeasible for many companies. Exhibits must be ordered or produced many months in advance. The government has declared that the fair is to be hold, but the rules or the required exception were not there until the promised end of May. Sometime in May, they should have made it clear to us that an mass event of this magnitude could not be allowed, and that was it.

What did you specifically ask for?
We have been requesting the exclusion of trade fairs from the category of mass events. You can't throw a concert, football, worship, farmers' market or trade fair into one basket. Each trade fair event must be assessed individually, because each has completely different parameters. Each exhibition center has different parameters. We provided all possible background and arguments. We have presented a set of possible measures to increase hygienic safety. Partly according to our considerations, partly taken from abroad. But it went unanswered. There was a lack of will to deal with it. The Czech rules for mass events, including trade fairs from 22 June, are disappointing for us. The rules are simply not trade-fair friendly. There will be some adjustment maybe, but it's too late.
You also refer to the comparison with shopping centers.

Of course. Colleagues in Germany, Hungary, Romania and other countries do the same, where they cannot get a reasonable solution. Of course, the extent of MSV is in the order of over twenty thousand people a day, even if these people are not in one place at the same time, is a bit sci-fi for our epidemiologists. At medium sized fairs, however, these numbers are completely comparable to the average attendance of shopping centers, where no one prescribes any limits, sectors and numbers of people.

Can you give examples from abroad?
Austria is a gtrsz example. Congresses and trade fairs can now be held for up to 10,000 people without major restriction, and it is OK. In some countries, fairs are allowed, but with strange rules, like Poland. However, the most absurd rules were introduced in the Czech Republic. This proves a different and subjective perspective in different countries

Who is to blame?
There are no feasible rules for congresses, fairs, corporate events, which is our daily bread. Also, cross-border travel is limited, and many events are international with the participation of foreign countries, and they either cannot come or are not in the mood to travel. The overall mood in the economy and society does not support us either. Above all, however, our business activities remain prohibited by the state. The culprit of our situation is the coronavirus and the government restrictions that have been here for too long.